“Peter [The Great] emancipated the Russian women, except those in his own family. He put them into convents.”

“He had the haunted look of the true humorist. All his friends loved him.”

I was 19 or so the first time I read ‘The Decline and Fall of Practically Everybody,’ by Will Cuppy (1884-1949,) and I was so in love with it I decided to write something similar. I began collecting notes and writing little encyclopedic articles about, well, everything I could, in a style that combined (or tried) Ambrose Bierce’s Devil’s Dictionary‘s sarcasm and Cuppy’s own brand of comparatively more light-hearted humor. Then I read that it took Cuppy 16 years and 15.000 notes to write that book (and he didn’t even finish it,) so I decided to do something else with my time.

It’s a tragedy that Cuppy, crippled with increasing depression and the prospect of eviction from his apartment, committed suicide because his book became an instant best-seller when it got published (1950) just one year after his death. Not to mention that it’s one of the best books ever written.

END_OF_DOCUMENT_TOKEN_TO_BE_REPLACED

“The better to order his faculties, Cugel took a long draught of beer.” 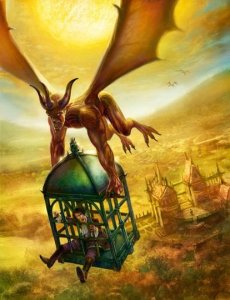 I was going to write a long review of Jack Vance’s Cugel’s Saga, the book about the adventures and misfortunes of the outrageously selfish and coward Cugel the Clever (or so he thinks,) but I have decided to let the book and its florid style speak for themselves.

Don’t panic, it will be a short expatiation, just a few things from the first chapter, but they will be enough to convince you of its merits.

After some magical mischief, Cugel finds himself lost. He comes upon “an elaborate manse of archaic design” and tries to convince the peculiar doorman to let him in.