There is a type of news or news article that reflect the current zeitgeist so well that they deserve their own analysis.

Coffee farmers, buyers, roasters, retailers and baristas from around the world are gathering in Seattle this week to show off their wares, compete in the U.S. Coffee Championships and do business.

And nothing goes better with coffee than conversation.

At an industry symposium on the sidelines of the Specialty Coffee Expo in Seattle, talk focused on challenges ranging from climate change and consolidation to the industry’s struggles with equity, diversity and inclusion up and down the supply chain.
The arrests of two black men in a Philadelphia Starbucks provided immediate context.
[blablabla]
Other speakers pointed to an economic reason to welcome more under-represented minority groups into the coffee business, particularly as the industry looks for its next wave of growth. In the U.S., young, ethnic minorities represent a huge and growing market of would-be specialty coffee drinkers, but they may not see themselves reflected in the industry, said Phyllis Johnson, president of BD Imports.
How should the industry increase coffee consumption among African Americans and other minority groups, Johnson asked. Her answer: “Hire them.”

This article links to an older article: “After arrests, Starbucks is talking race.”
I know most of you reading this are American, so bear with me when I say this is the most American thing I have read in a long time. It combines self-centeredness and lack of geographical knowledge, peak wealthy liberalism, and peak corporativism, all mixed together in an unholy brew of moral superiority and ignorance.

Now, here’s the problem: Coffee is a tropical plant. It cannot grow in, say, Seattle*. Wealthy Westerners are consumers of coffee, not producers. It’s a geographical and climatic fact. These are the main producers of coffee:

*I recently reviewed an (allegedly) sci-fi almost-apocalyptic story set near Seattle, and for some reason, coffee ignorance was something I found also in that story.

Brazil, Vietnam, Colombia, Indonesia, and Ethiopia are the top 5 producers. I have not been able to find where Starbucks (the focus of the previous article and this post) gets its coffee but I’ll assume it’s from those countries. In any event, those are not Western countries. They are pretty much the definition of “People of Color” or, literally, Black Countries.

Now re-read the article above, with its moral grandstanding about racial sensibility and let what they are saying sink in. A business that is literally based on black people from poor countries picking up seeds so wealthy, usually whiter people, from the USA can drink their overpriced lattes is now presenting itself as racially inclusive, claiming black people have to be part of the business? Like, seriously:

Other speakers pointed to an economic reason to welcome more under-represented minority groups into the coffee business […] talk focused on challenges ranging from climate change and consolidation to the industry’s struggles with equity, diversity and inclusion up and down the supply chain.

Dude, your supply chain is poor black people (or South Americans) farming to bring caffeine to America. The coffee industry is literally about that.

But you know that’s now what they are thinking; they obviously don’t mean inclusion in small Ethiopian, single-family farms, they mean “inclusion” in their corporate culture, in their ads (which is what the “anti-racial bias training” they have promised looks to me — a huge ad,) and as consumers. Compare this racial-sensitivity with how the World Intellectual Property Organization described (2010) Ethiopian coffee farms (Starbucks is mentioned in the article, so I’ll assume they do business with Ethiopia):

Specialty coffee in Ethiopia is grown on over four million small plots of land by an estimated 600,000 independent farmers spread throughout the country in remote areas. […] Distribution is also a problem, as it is predominately done informally by hauling bags of coffee on foot for many kilometers.

Now, you see, here’s the issue with American progressivism: it’s consumerism. Every issue they find is on the consumption side or in a high-end, almost luxury, creative domains (e.g. popular entertainment or whether wealthy actors get paid more than actresses and that sort of stuff.) “Representation,” essentially, which is code for “consumers,” so “women representation” is just “women consumers” since it’s assumed they are the next big global market. It’s all from the consumption side, and the only way to “fix” the problem they find is always the same: consume more of our stuff (not the competition, please) and don’t ask where it comes from or how it’s made (or if it’s good, the fact it’s “progressive” makes the question of quality irrelevant, apparently.)

However, let’s see how this stuff actually works in real life. After all, one could argue that there’s nothing wrong with expanding your market to underrepresented groups (although disguising such motivations as political or revolutionary is tacky, at the very least.) I’ll use Seattle as an example since that’s where Starbucks was born and where this “controversial” issue is, allegedly, being debated and solved. I’ll upload a few images but I’ll ask you to try to overlap them mentally.

**A commenter on Google+ has told me this image is not accurate: “the map of Starbucks locations is incorrect. There are actually quite a lot more Starbucks in South Seattle than shown. The density of Starbucks is still less than downtown and north Seattle. Looking at Starbuck’s own map of locations is more accurate. But, mostly the map shown when zoomed out combines multiple locations onto a single icon. The interesting thing is that it isn’t just Starbucks the density of all coffee shops increases in the northern parts of Seattle. There are literally buildings in downtown when there are two Starbucks on opposite”

Race and ethnicity in Seattle:

Seattle income by district. Don’t mind the left image unless you are interested in Seattle elections:

Now, I’ll admit this is no serious study, just a visual correlation, and I’m ignoring urban density, but to sum up: Black people are concentrated in George Town, the Industrial District, Beacon Hill, and Columbia City or, in general, the south end of the city. Those are the poorest districts, and there’s only one single Starbucks coffee shop there. Meanwhile, above the Interstate 90, in the comparatively wealthier districts of Queen Anne and Capitol Hill, Starbucks thrives. So, Starbucks is currently trying to rebrand themselves as racially conscious when, even in their own turf, they don’t bother opening shops in black(er) districts.

Let me quote again this marvelous piece of nonsense from the original article:

How should the industry increase coffee consumption among African Americans and other minority groups, Johnson asked. Her answer: “Hire them.”

How to? I don’t know, you could start by opening shops where they live. Also, you have already hired “black” people (African, not African-Americans, though,) but they look like this (and I’m sure they already drink plenty of -cheaper- coffee): 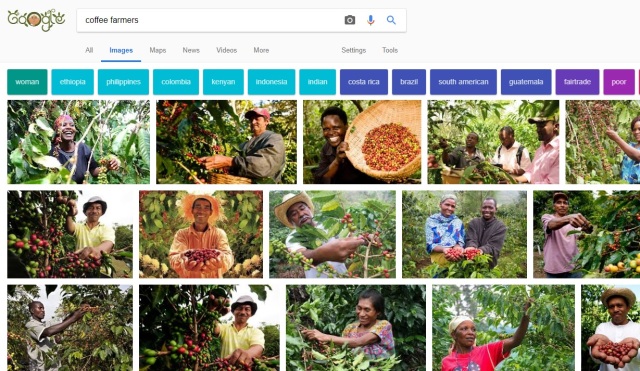 But thank God that, after the arrests, Starbucks is starting to talk about race!

This site uses Akismet to reduce spam. Learn how your comment data is processed.